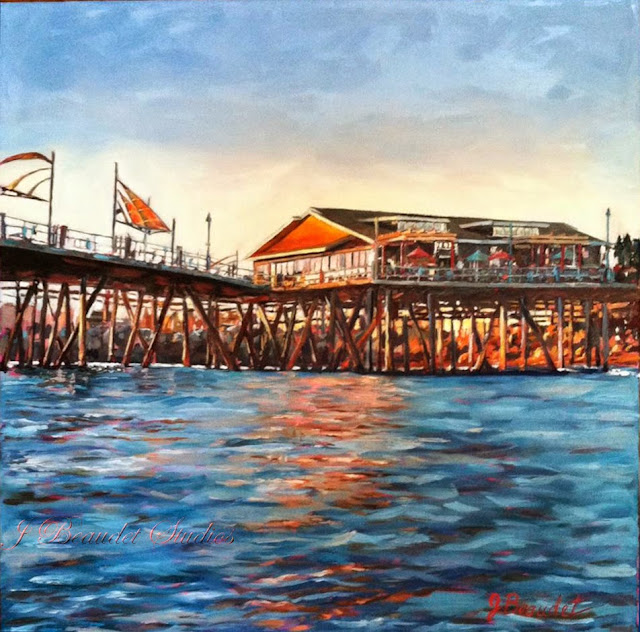 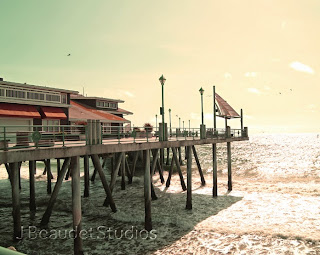 Here's the finished piece! Still wet on my easel. This pic was taken with my phone so it's not the greatest. I'll be taking some good ones tomorrow and then send them off for approval! 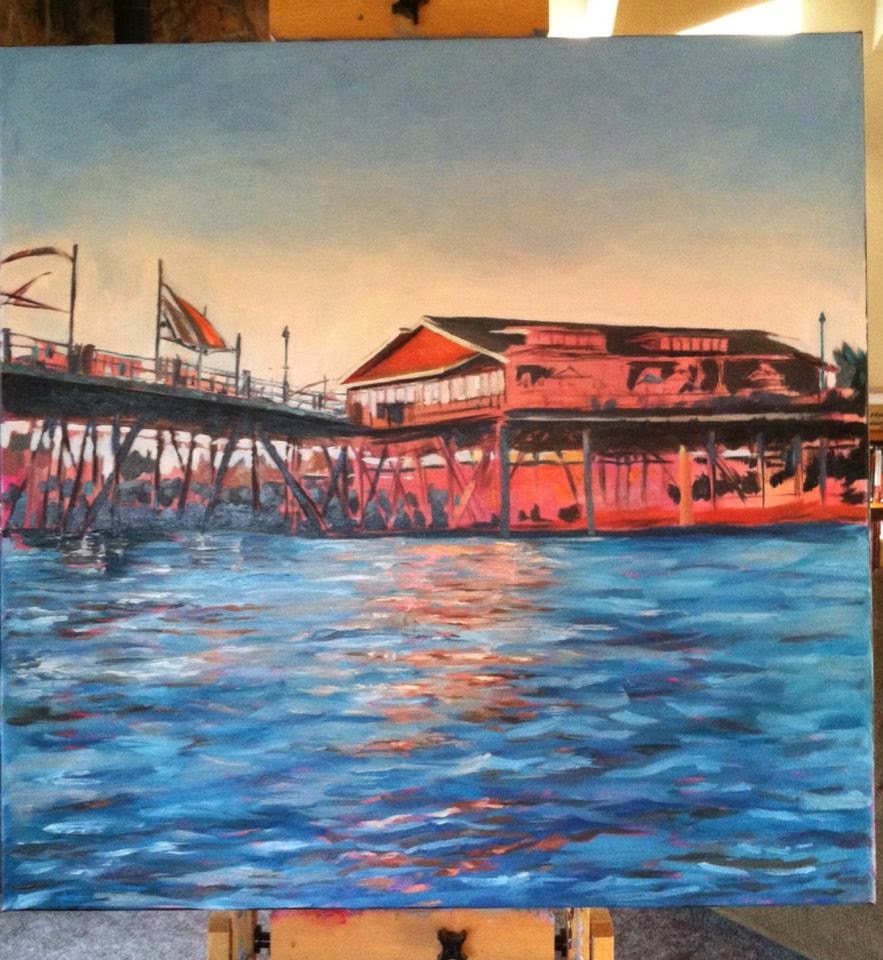 It's finally happening! You might remember me mentioning some big studio news about six months ago.  I had been contacted by a restaurant designer and asked if I had any Redondo Beach artwork. She was in search of new art for an upscale restaurant on the Redondo Beach Pier. If you've been following me from the beginning, you'll know what a big deal this is for me! I grew up there, and the pier is always been the first place I go with my daughter when I visit my home. So many good memories there! I blogged about the pier back in 2009 and have done several paintings of it. They were interested in buying this one I had already done, but the size wasn't right. There also needed to be three that went together.

This was the one she was originally interested in…the one underneath was a smaller version I had painted before I painted a larger one.


Here's what's on my easel now! I took the photo with my phone, so it's not the best quality. The sky is more blue than it looks right here.  Since this one was taken, I've done more work on the pylons and boardwalk, and I'm almost done; just getting ready to start the next one! I'll try to post the finished one tomorrow.

Here's Randy on his kayak...

Good times around here right now! Thank you to all who have made this happen…! :)
Update-
I was honored to have worked with such a wonderful man. He is deeply missed.
At the time I painted this I was living in Northern California. I am now in Socal again. I'm in San Clemente. I will always love my hometown of Redondo and try to visit as much as possible.
Here are some new local landscapes I've done 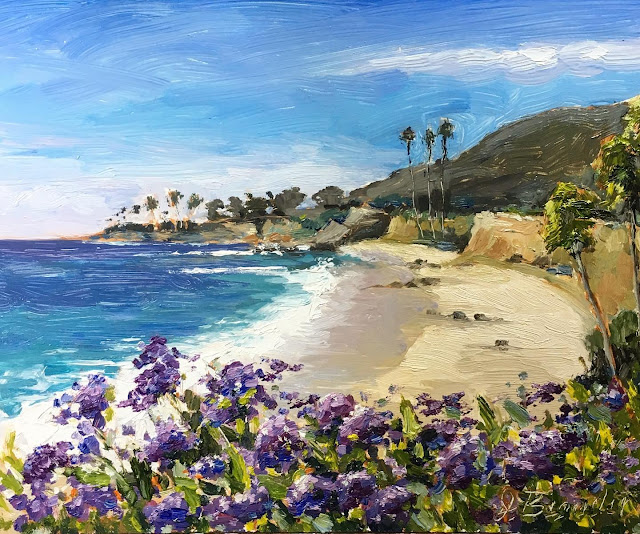 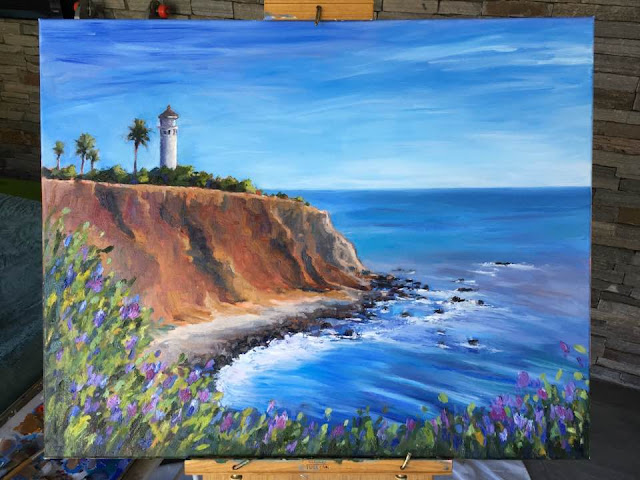 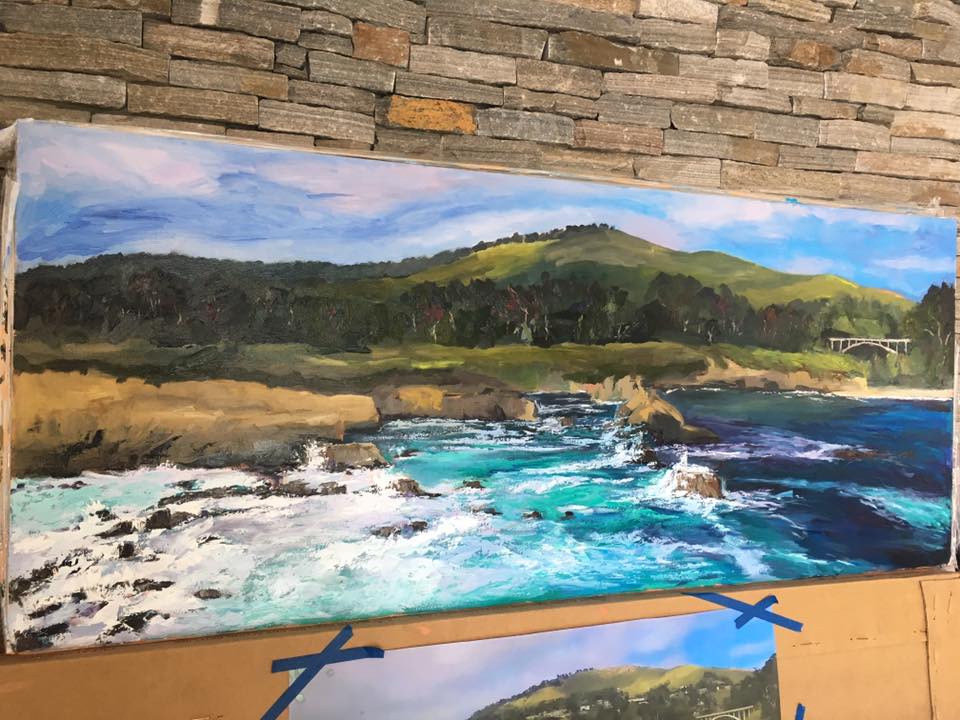 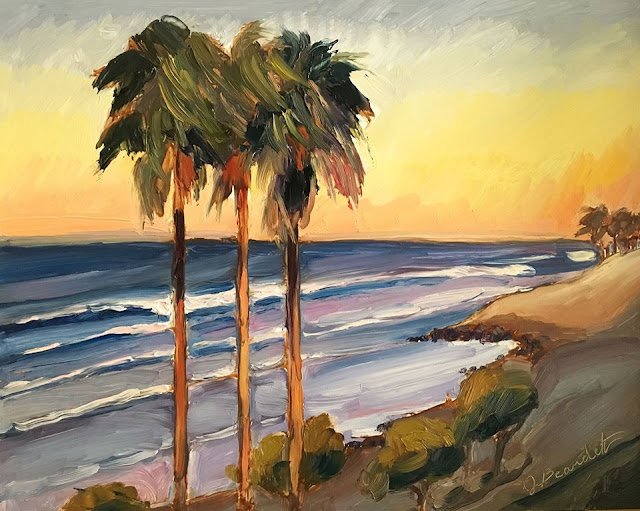 Happy 4th of July Weekend to all my friends in the US! I have to also mention that this is my birthday month and I'm already starting to celebrate! 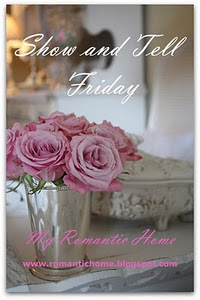 Terra said…
What joyful news for you, my dear artist friend. God is blessing you with this work which will add to the beauty of the restaurant. Well done.
July 5, 2014 at 4:49 PM

Castles Crowns and Cottages said…
JENNIFER! My friend, I was without internet for 24 hours due to a storm yesterday! I now have seen your comment and visit, and I thank you so much for coming over! YOUR PAINTING is stunning! I love the water, and of Redondo Beach pier? YES YES YES! Your colors are striking and I'm glad to know that you are greatly appreciated! Just yesterday we had guests at the house, and the gentleman who came over was admiring the portrait you painted for me of Les Trois Dames....he really loved your work, and I enjoy this piece every day as I spend a lot of time in my studio.

Jennifer Beaudet said…
I hope you're all safe after the storm Anita! Thanks so much for your sweet comments about my latest painting! I love hearing about your guests review of our creation! That was a lot of fun to interpret your vision! I need to do a post on the whole process and show your beautiful portrait!
I'm thinking about what I'm going to post for your French party. I have a few pics coming back from there (Paris) so they might be included! So exciting! :)
Jennifer
July 10, 2014 at 10:33 AM 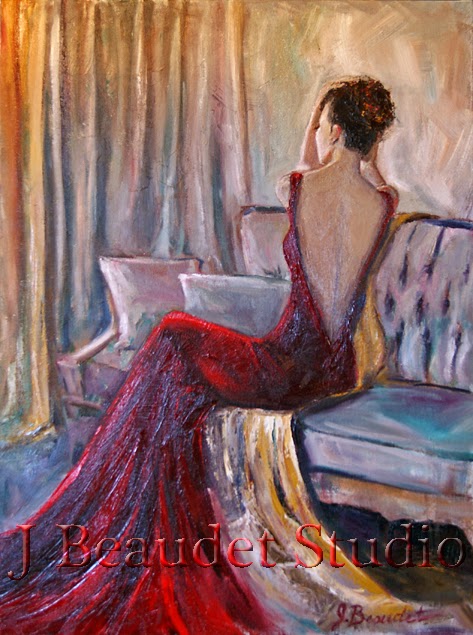 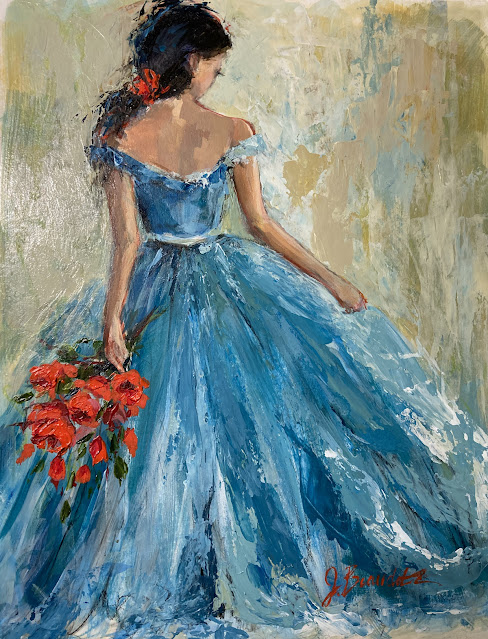 New Painted Lady in Blue! Paper mounted on board

Jennifer Beaudet
Hi! I'm artist Jennifer Beaudet, from California. I paint abstract impressionist oil paintings of local landscapes, flowers, and women in formal gowns. I've been oil painting and posting on here and Etsy since 2009 and have another website jbeaudetstudios.com. I'm influenced by the beauty that surrounds me and my passion. I discovered at a very young age that creating something I'm passionate about is very fulfilling. I paint figures in glamorous gowns, florals, and landscapes. I'm exploring new mediums and techniques for my abstract florals, and California landscapes. To commission me you can contact me on www.jbeaudetstudios.com or on my etsy shop JBeaudetStudios, Thank you! 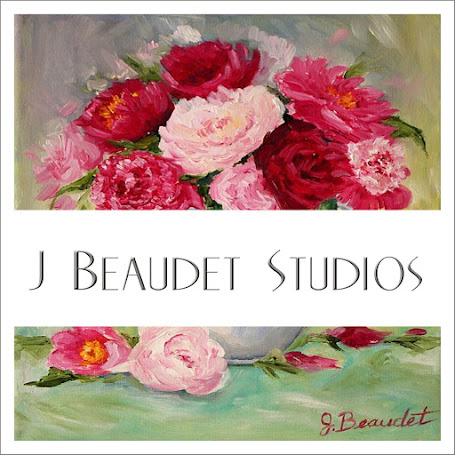